1936
In November, the Most Rev. Michael Gallagher, Bishop of Detroit, established a Catholic church in Marysville. Fr. Leo J. Trese was named the first pastor. The name St. Christopher was chosen for the parish. At this time the parish had a membership of 60 families.  The first Mass was celebrated on
November 22, 1936. The first Baptism took place on November 29, 1936. 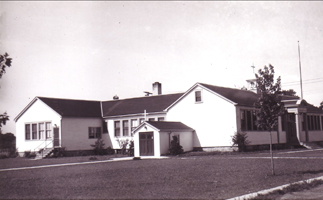 1937
In February of 1937, the Old Morton School building was purchased for $500 and at a cost of $1500 was moved by log rollers to the parish grounds on Michigan Avenue. Renovation of the building began. The eventual cost of this project was $6000. On February 9, the first marriage celebrated was between Ida Prevost and Robert McKenzie. Forty (40) children made up the First Holy Communion class. On June 27 the first Mass in the renovated building was celebrated.

1938
February 28 of this year saw the burial of Israel J. Prevost. This was the first funeral Mass performed at our church.

1939
In April, property was purchased for a new rectory. On August 20 the Pastor moved into the new rectory.  Ninety-six children from St. Christopher’s were confirmed on April 30 by the Most Rev. Stephen S. Woznicki. The upper level of the church building was converted into the Convent and School. The church was located in the basement of the building. Three Sisters of St. Joseph came from their Motherhouse in Nazareth on August 27. They were here to prepare for the 80 students who started St. Christopher’s school on September 7.

1950
In June, the ground was broken for a new church/school building. 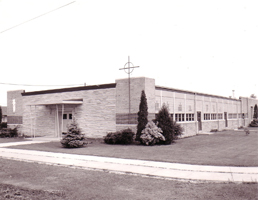 1951
In May we moved into the new school building. We had 291 students in eight grades. In Sept. the first Mass was celebrated in the new church. The building was dedicated by the Most Rev. Allen J. Babcock, Auxiliary Bishop of Detroit. 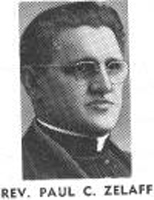 1958
Ground was broken for a new convent on July 14. Fr. Paul C. Zelaff was named pastor in September.

1959
The Sisters moved into the new convent on January 23. Fr. James Fitzgerald became Administrator of the church. Fr. Joseph McElgunn was named pastor on April 7.

1961
St. Christopher’s celebrated its Silver Jubilee. The Parish now had a membership of 400 families.

1962
A new addition was made to the convent to accommodate the Sisters of St. Joseph, who had come to teach at Port Huron Catholic High School.

1971
After10 years of fine service in the Blue Water area, Port Huron Catholic High School closed its doors and the teaching Sisters left. A new four car garage was built in November.

1972
The original school was demolished to make room for a future church on this sight.

1979
In May, Fr. Joseph P. Mc Elgunn celebrated 40 years as a priest with a Solemn High Mass and Open House.   This was also the occasion of his twentieth year as pastor of St. Christopher’s.

1983
At the parish council meeting in September, the decision to build a new church was made.   In April, Bishop Cooney approved Fr. Gagnon’s request for a deacon.  Maurice Varieur was appointed to this position.  His wife, Cecile, became the Pastoral Care Minister for our parish.

1984
In February and March, a drive was held to raise money for a new church.  By the end of the two months, 426 families had agreed to participate with money and pledges totaling $423,355.00.  The decision to close the convent and have future nuns live off campus was made in April.   This was done with the intention for the convent being converted into a rectory and parish office.

1986
In June, a Mass and reception were held in honor of Fr. Gagnon’s twenty-fifth anniversary in the priesthood.  He moved into his new residence in July and in August, the new offices opened in the former convent.  The old Rectory was sold for $10,000 and was moved from the property.
On November 15 and 16, we celebrated St. Christopher’s Golden Jubilee.  The Parish is made up of 700 families.  The celebration included a dinner-dance at the American Legion, Marysville on Saturday evening and an anniversary Mass on Sunday afternoon, with many area priests and dignitaries in attendance. 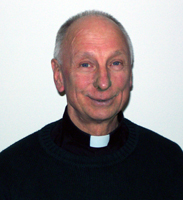 1999-2002
The present altar, ambo, presider’s chair. Easter candle holder, altar candle holders and the large crucifix were added to the church.   All were designed and built by a local artist. 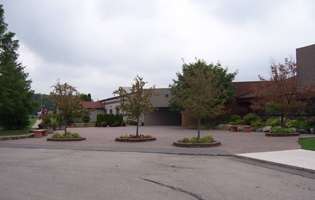 2001
The courtyard on the west side of the church was constructed. 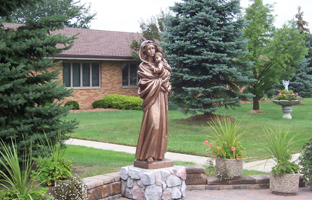 2003
The bronze statue of Our Blessed Mother was erected in the west courtyard and dedicated in May. 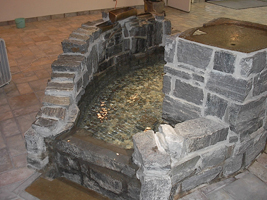 2005
The baptismal font was replaced and the gathering area remodeled.   The font was designed by a local artist. 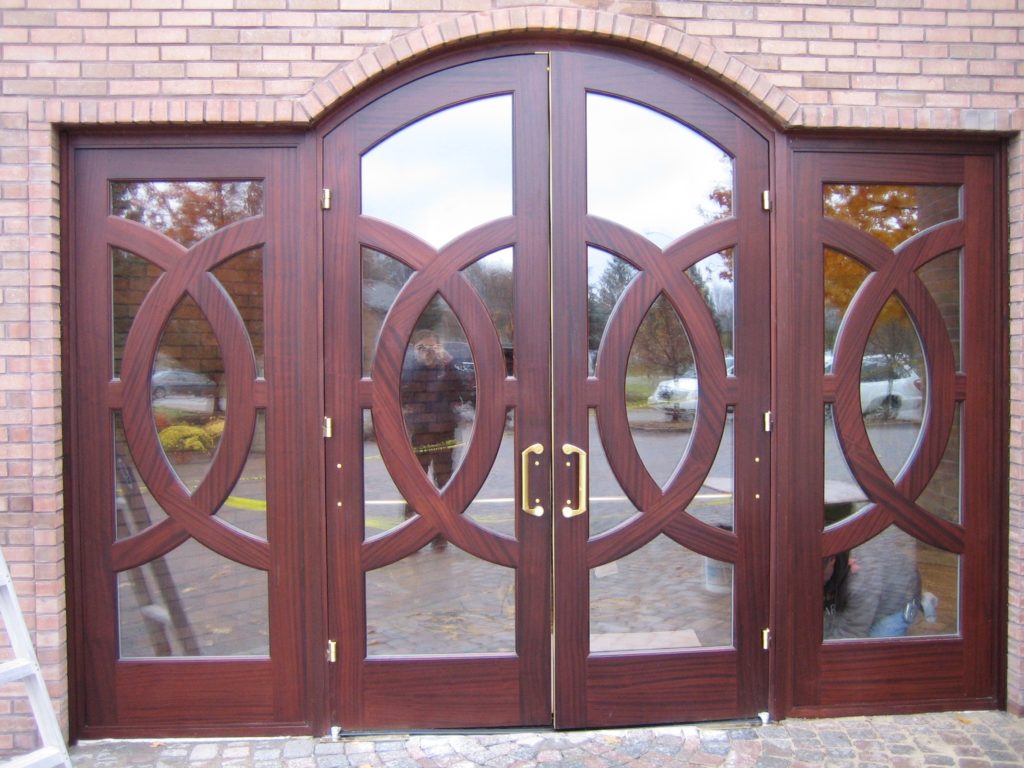 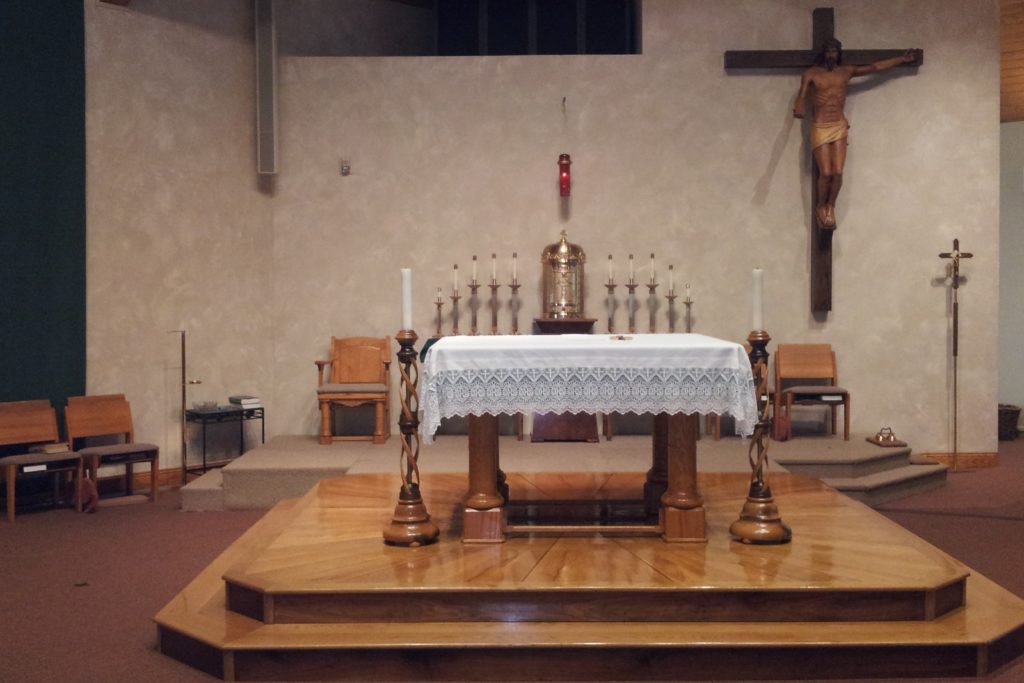 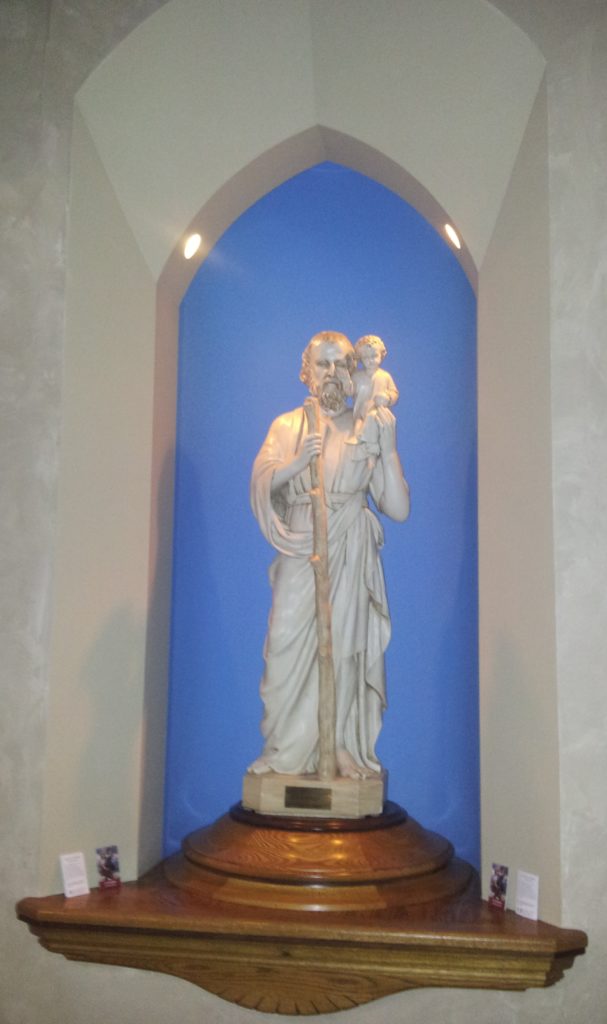 St. Christopher statue is in the Church.